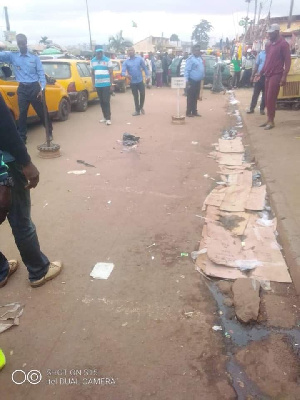 Picture of the explosion

The Mokolo market in Yaoundé now lives in psychosis and fear. This Tuesday again, a homemade bomb has again exploded in the heart of this market more precisely at a place called Mokolo Sapeur, learned the editorial staff of camerounweb.com.

The traders and populations of the Mokolo market, located in the 2nd district of Yaoundé, one of the most popular markets in Cameroon, are now living to the rhythm of panic. Within a week, another explosive device has just targeted said market. According to information received by our editorial staff, this Tuesday, July 12, 2022, a homemade bomb exploded, injuring at least one person. For now, there is no information on the origin of the bomb. Informed, the police rushed to the scene to define a security perimeter in the area while waiting to open an investigation to better elucidate this incident.

It should be noted that this is the second time in the interval of a week that this type of incident has occurred in this populous and important market in the Central African sub-region. We still remember, on Saturday July 2, an explosion occurred in the same market. not far from a supermarket opposite the Public Security Commissariat of the 2nd arrondissement of Yaoundé. According to witnesses, this explosion, the origin of which remains unknown, caused several serious injuries, who were evacuated to the nearest hospital.

This resurgence of explosion should challenge the authorities.

The benefits of gamification in marketing and customer engagement.

The Impact of 5G Technology on the Internet of Things (IoT)